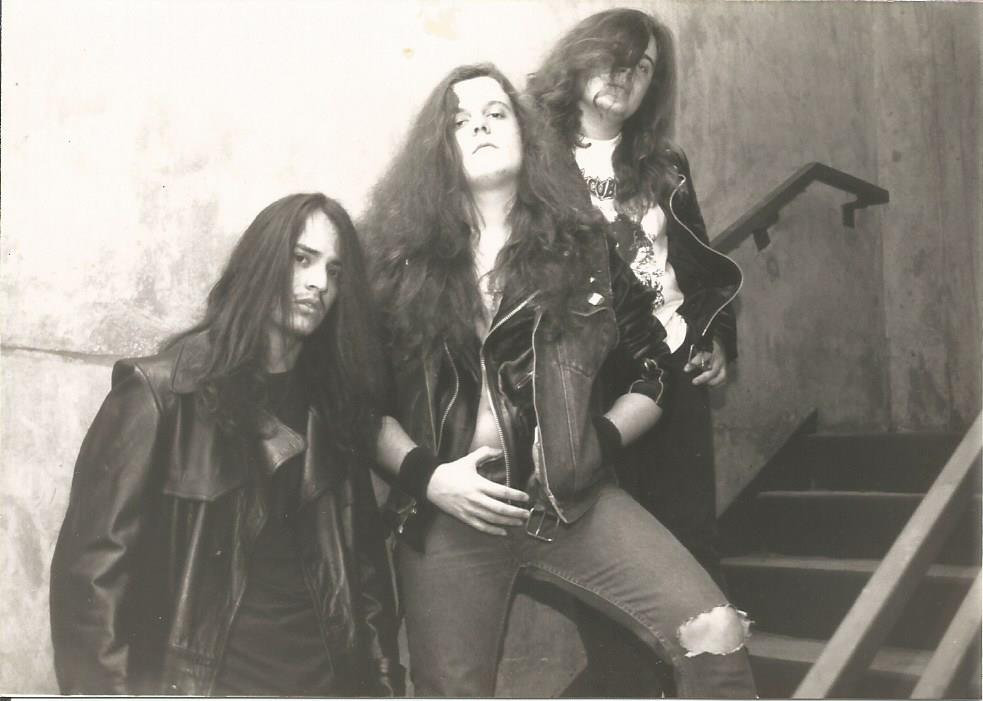 Influential Louisiana death/thrash trio OPPROBRIUM (formerly known as Incubus) has shared a new track from the remastered version of landmark 1988 debut album Serpent Temptation! “Incubus” has premiered via Invisible Oranges, and can be streamed at THIS LOCATION. Invisible Oranges had this to say about the track:

“‘Incubus’ has tight, brutal drumming, the fastest guitar riffs and chugging and contrasting solos. Vocals are easy to understand, growled and shouted at the same time. Incubus/Opprobrium were one of the fastest thrash bands out there and 27 years after its release the music is still ferocious.”

Released at the height of extreme metal’s reign, the pioneering deaththrash record Serpent Temptation has since been rightfully hailed as an underground classic for its innovation and ferocity. Undoubtedly one of the heaviest records of the 1980s, the album has now been remastered by Brad Boatright (Sleep, Obituary, etc) and includes four bonus tracks from the band’s 1987 demo plus an extended booklet.

The remastered reissue of Serpent Temptation is due out worldwide on deluxe LP on January 15, 2016. Serpent Temptation and bundle deals are available for physical preorder via Relapse HERE, and digitally via the band’s Bandcamp page.

Info/Bio:
Back in mid-1982, Moyses M. Howard (drums) and Francis M. Howard (guitar, vocals) moved from their native land of Rio de janeiro, Brazil with their parents and settled down in Louisiana (New Orleans) USA. For the brothers, from ’84 then on, both formed numerals metal bands with friends from school and numerous musicians, playing shows, under quite a few different band names at the time.After a couple a years, they took interest in the newer underground metal and hardcore bands in the mid 80’s that was starting to gain popularity, the speed and the intensity of that kind of music fascinated the brothers; Then on February 1986, they formed Incubus (Opprobrium’s old band name at that time). Moyses and Francis put Scott W. Latour on vocals, a New Orleans-born bass player. In May ’87, the trio recorded their first demo, entitled; “Supernatural Death”, which spread through the underground Death Metal scene as the band continued on playing shows.

A few months after the release of their demo, the band released their first debut album “Serpent Temptation” (produced by Incubus a.k.a. Opprobrium) through Brutal records (USA) and Metal Works (UK). This masterpiece made quite an impact in the international metal scene and built up a strong worldwide fan following. At the end of ’89, both the band and a newer label, Nuclear Blast, that was freshly starting out, got in contact with each other in talks for the second band project. Nuclear Blast took the chance, signed the band and released the brilliant follow-up “Beyond the Unknown” in the mid 1990s, an album that both Francis and Moyses recorded by themselves at Morrisound recording studio in Tampa, Florida (produced by Incubus a.k.a. Opprobrium and Tom Morris.)

In 1997, the brothers started to write new material and in late 1999, Francis and Moyses decided to record once again a collection of 10 new songs with Nuclear Blast records. They started to record their third album “Discerning Forces” during October/November 1999 in their native land of Rio de Janeiro, Brazil at Discovery Digital Studio (with producer Harris Johns: Kreator, Sodom, Voivod, Whiplash, etc.). Harris Johns mixed the album at his Spider House studio (Berlin, Germany) in Feb-March of 2000. Once again the Howard brothers did the whole recording as a 2 piece band, Francis played all the rhythm and lead guitars, bass and vocals, while Moyses handled the drums. “Discerning Forces” released in 2000, the band’s third album, was released under a new band name; Opprobrium. The album shows a much more technical death metal material ever recorded by the brothers, with Francis reaching one of his most brutal vocal tones to date. The band changed their name from Incubus to Opprobrium, so their fans wouldn’t mistake them for the new Pop/Rock band Incubus from Calabasas, California.

In October of 2005 both Moyses and Francis along with their families coincidently moved back to Tampa, Florida, after the devastating effects of the powerful hurricane “Katrina”, which destroyed their home town of Metairie/New Orleans in the state of Louisiana, and the Howard brothers has been living in Tampa ever since. During the fall of 2007, Francis and Moyses started to talk about a fourth Opprobrium record and from this meeting Francis started working on the new material for the new Opprobrium album. In July and August of 2008, the band recorded and mixed the new album in Tampa, Florida, and again, another album recorded by the 2 brothers, with Francis yet again doing all the guitars, solos, vocals and bass, and his brother Moyses on the drums. Eight years later (2008 Europe/Worldwide – 2009 U.S.A./N. America) Opprobrium returned with a vengeance with one of their most brutal and powerful album to date “Mandatory Evac” (produced by the band) through Metal Mind Records.

On Serpent Temptation, OPPROBRIUM is: