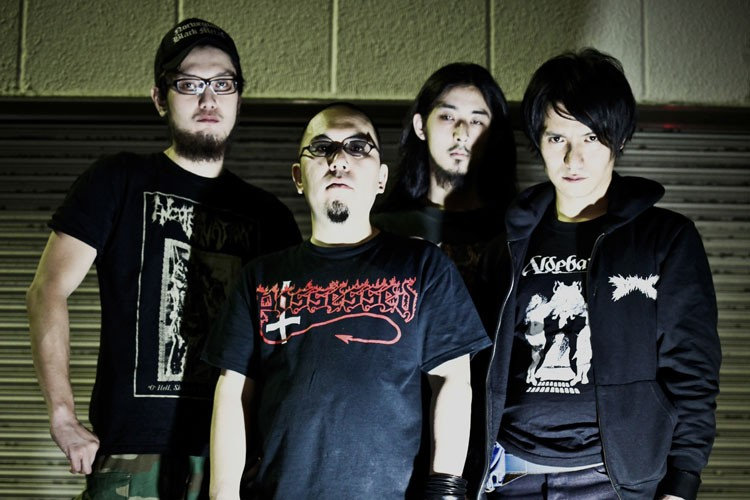 Tokyo’s COFFINS have confirmed a new American invasion this winter, once again bringing their diseased, suffocating death-doom decimation back to this side of the Pacific. Bringing forth bulldozing hymns from their latest full-length The Fleshland and a brutal back-catalog of mid-paced gravedigging metal, COFFINS will plunder Brooklyn, NY followed by six West Coast dates with support from Noothgrush. A full list of dates is listed below.

COFFINS has recently completed recording a split with fellow Relapse deathmongers ILSA! The as-yet-titled split is currently being mastered by Brad Boatright (Sleep, Noothgrush, etc) and will include one track from each artist. The split will see release via Relapse Records in 2016 and also features artwork by ILSA‘s Joshy.

COFFINS is a Japanese doom-death band, formed in 1996, that has scavenged the depths of evil and darkness throughout their decade-plus existence as they slowly work toward a flawless refinement of all the things we love about the genre. According to Exclaim!, COFFINS might not innovate but instead “reanimate one of the darkest, most oppressive chapters of metal with consummate style and punishing panache.” Band members have displayed their immense talent and power since their debut full-length, Mortuary in Darkness, released on Razorback Recordings in 2005. A year later, they followed up with their sophomore release, The Other Side of Blasphemy, released through Imperium Productions. This album managed to somehow increase the heaviness of Mortuary, but it wasn’t until 2008’s Buried Death that the band truly reached the sonic nirvana they had been aiming at since their beginnings.

Buried Death, which Metal Reviews referred to as “satisfyingly heavy” as well as “raw and nasty,” was released through 20 Buck Spin and would be the band’s final full-length before signing to Relapse Records in early 2011. Before the signing, COFFINS spread their sound across an enormous amount of split-releases with such acclaimed acts as Warhammer, StormCrow, and Hooded Menace. Additionally, the band has performed shows with bands such as Yob and Kylesa, and has made appearances at Roadburn Afterburner and Los Angeles Murder Fest. COFFINS also just finished a massive European tour, following thorough excursions in the east and west coasts as well as a successful tour in Australia.

In 2013, COFFINS released their fourth full-length and Relapse Records debut The Fleshland. A refreshing and mind-bending amalgamation of doom and death metal’s greatest moments, the LP shows COFFINS smashing down everything in their path with nine grisly tracks. With over forty-five minutes of low-end, sludge-infiltrated, plodding, doom, captured with some of the best production values in the band’s meaty catalog of carnage, The Fleshland was recorded at Tokyo’s Noise Room Studio with engineer Shigenori Kobayashi, and produced by Bungo Uchino and the rest of Coffins. The Fleshland can be streamed in its entirety below:

Nonetheless, there is no denying that, regardless of any esteemed influences these titans might bring to mind, no one is doing metal quite like COFFINS right now.